Amsterdam is quickly becoming Europe’s hottest tech hub. The expected influx of 150.000 new residents by 2040 requires new ways to keep the city safe, and easily accessible to visitors and citizens. This puts the development of smart solutions for crowd management at the top of the city’s priority list. Three innovation accelerators who are pushing the envelope when it comes to smart solutions shared their vision:

To make Smart City concepts work and manage crowds in a profound manner, co-creation between the private and public sector is vital. Carter explains that the public sector will always need the private sector to deliver innovation and new products.Van Raan supports this view: “This whole idea of a participation economy is becoming more and more important. Working relationships between public- and private companies, but also citizens have to work together.”

Carter stills sees a gap between stimulating innovation, and allowing those innovations to become purchas- able products. “It’s really important that the city is trying to make constructions that will work, because otherwise it’s just a lot of innovation that can never be purchased.” To this end, the Municipality asked the Amsterdam ArenA to set an example for the city when it comes to the development of smart solutions for crowd control. Van Raan explains:

“The city has asked us to take the lead here, because they know that when we commit to an initiative we see it through.” Baron adds that the ArenA is a great playground to test smart applications because it is real. The thing about a multifunctional stadium is that people don’t go there with the idea that experiments are going on there. They go there to watch a football match or an event. “This helps us tremendously to get real-time information about real people doing real stuff.” 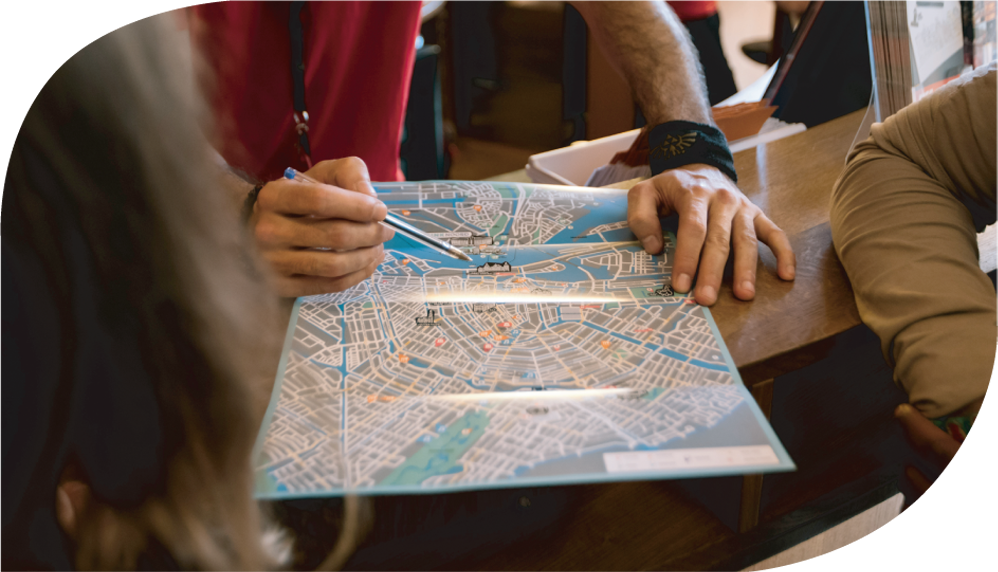 The stadium attracts 55.000 visitors per match or event on average, so crowd management is very important. Van Raan explains that “to create a seamless user experience for our visitors, it is important that the journey from their home to their actual seat in the ArenA transpires as stress free and comfortable as possible.” To accomplish this the ArenA is using sensors everywhere; these can be beacons, but also cameras and chips. “If we put all these ‘digital chains’ around the stadium, we know exactly when visitors are in the neighbourhood and in the stadium.

If we know exactly who is in the stadium, as well as the number of people present, we know what we can expect. If there is a sign of an incident, we can quickly resolve the issues,” Van Raan explains. Carter states that beacons provide functionality to the city in the form of offline information and navigation. “This is important in a city like Amsterdam, where you have lots of foreign tourists that might not have data roaming switched on.” But according to Carter it does not help to manage crowds.

Baron agrees with Carter: “If people want to go to the Anne Frank Museum, the Anne Frank Foundation could redirect them if it’s busy. There will always be a small selection of people you can nudge to go somewhere else, but for most people GPS will be enough,” thus eliminating the possibility of control.

Glimworm also helps to develop smart solutions for crowd control, like the ‘Reis Je Rijk’ app. This application stimulates people to avoid traveling during rush hours and busy times.“It’s really important that the city is trying to make constructions that will work, because otherwise it’s just a lot of innovation that can never be purchased.”

If you follow the travel suggestions that the app provides, you can collect points that can be exchanged for small rewards, like a free cup of coffee or a free train ticket. Carter stays: “Actually it got a lot of good results. A large percentage of students changed their travel plans when they could get rewards, because they are flexible.”

The ArenA has also implemented a mobility portal. The moment visitors buy their ticket; they can immediately choose their transport. Visitors who travel by car get instructed to use a specific parking entrance that relates to their seat in the stadium: “If you choose to go by car, it’s very helpful that your parking spot is on the same route as where you come from and not on the other side. This avoids crossflows,” Van Raan elaborates. However, this solution doesn’t give the exact location where there is a parking spot available, or finding your car easily after an event. “This possible feature will be explored soon.”

Parking is also a big hastle in the busy city of Amsterdam. Glimworm developed the app ‘Park Shark’, which enables people to find the nearest parking meters filter the search results based on location and duration, and calculates the cheapest parking near the desired destination. It comes as no surprise that this app won an award for the best Amsterdam app. 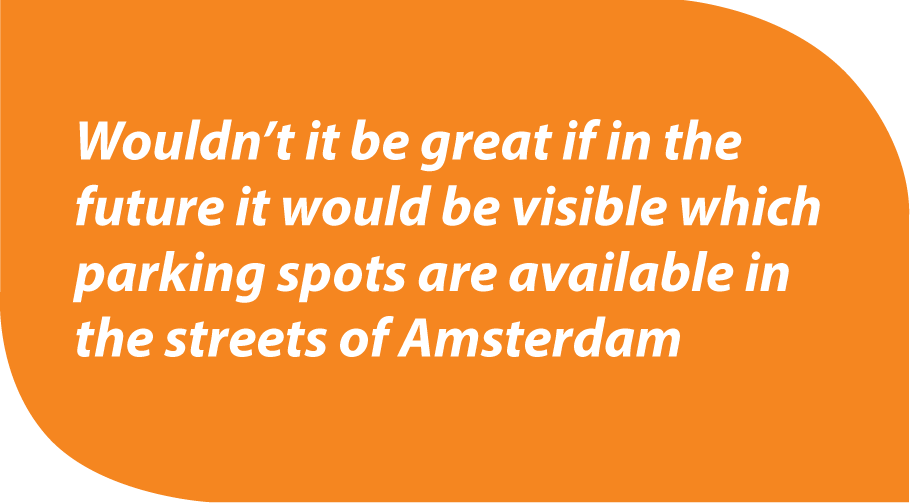 Glimworm has also developed a multimodal API for the Municipality of Amsterdam to enable them to provide real-time traffic information. The aim of that initiative was to bring data from different modes of transportation together into one API, and would help to facilitate the development of a multimodal app – a route planner that combines all different models of transport.
–
“We invest a lot of money in real-time traffic information. There is a lot of information nowadays, but the problem is that often there is not an alternative for people to act differently,” states Baron.
–
Carter agrees: “The government is always trying to get working people to travel at different times, so that they don’t fill up the trains or the roads. People are not traveling during rush hour because they want to; they’re traveling because they’ve been asked to come to work, and their boss probably wants them there at 9 o’clock.”
–
Carter also points out another paradox: “When everything runs smooth, you don’t actually need real-time traffic data, and when there is an emergency the data is least reliable. Let’s say that there’s a storm, and everything is running late, and maybe a tree goes across the line, the real-time data becomes unreliable, because it’s difficult for it to reflect that real-life situation.”

Van Raan adds that although there is already a lot of data, today it still has its limits: “The people that we collaborate with, like the police and our neighbours, are not used to sharing their data and this forms a challenge to come up with solutions that actually work.” Wouldn’t it be great if in the future it would be visible which parking spots are available in the streets of Amsterdam.

Baron does emphasise the importance of real-time data when it comes to crowd management. When real-time data is combined with historical data it gives the capability to predict what will happen, which in turn generates the opportunity to make choices: “Making decisions right now is very important, but it is very limited what we can do right now.”

Looking at the example of Amsterdam ArenA, the city knows now that to truly influence people to change their travel schedule, the communications need to start two days ahead, because that is when people start to think about their transport possibilities.

Half a year ago the Municipality of Amsterdam interviewed 25 people that were actively complaining about crowds on social media. It appeared that diving deep into the problem revealed a bunch of small problems: “During the interviews we started to notice that the real issue most of the time is not the crowds, but the consequences of it – like filthy streets and feeling unsafe,” Baron explains.

“When we can start to predict, we can also start to do interventions on the fronted, for example to make sure people won’t go into a certain street because it’s too crowded.” 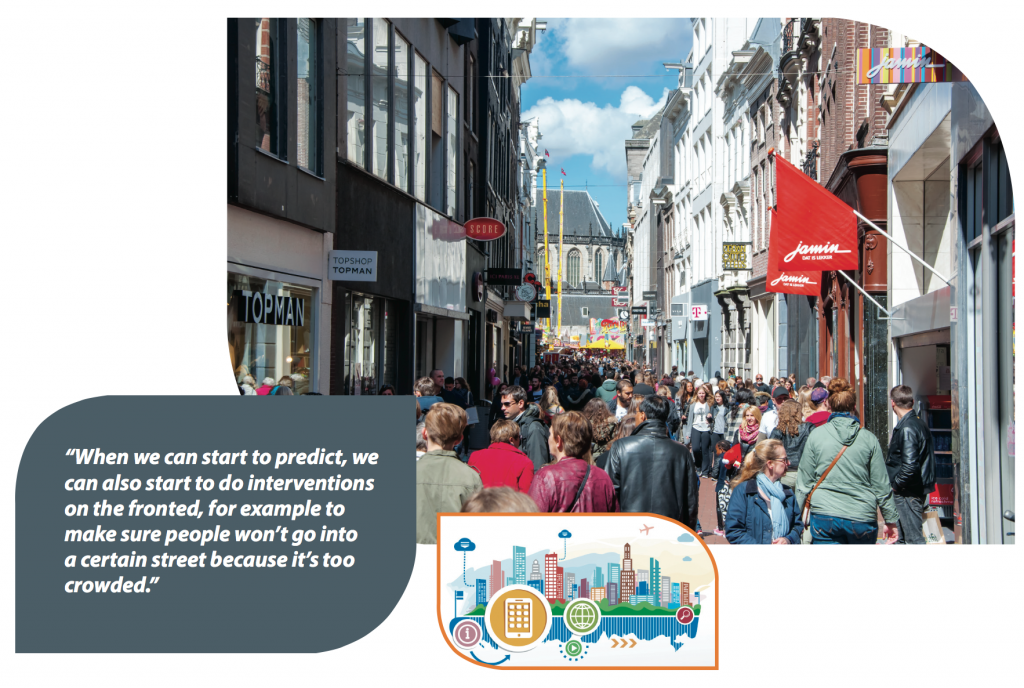 A crowd forecast would enable the Municipality to mobilise more cleaners, police or security on the exact points in time it is needed: “When we can start to predict, we can also start to do interventions up front, for example to make sure people won’t go into a certain street because it’s too crowded.”

He explains that certain elements in the infrastructure can be predicted without even contacting the visitors or citizens in terms of city logistics. Baron points out that in the last years logistics have grown 5-6 % per year in Amsterdam. He expects that this percentage will only increase, because everybody starts ordering things at Amazon, Bol.com, etc.

“I would say that when we start showing people these things, they would realise what the actual issue is. Second, it will also show us the possible solutions, because we will start to see how different partners drive the same route every day. We will know what is happening, but when you start to visualise this we can start to think about a way that we can do this more efficiently.”

To this end the Municipality organised a Hackathon that was held on June 17 2017 at Data Lab. The challenge was to predict crowdedness as precisely as possible and come up with solutions. And when you do come up with solutions, what is the best way to connect with people? In the end, it’s also about connecting with the citizens and visitors, Baron explains. “We should use platforms that are already there like Booking.com or Airbnb, because they already have customer’s contact information and we don’t.”

By 2040, when the city will hold 150.000 more residents, we will be able to tell which Smart City projects that were developed and tested in the Amsterdam ArenA will be applicable in Smart City living. Companies like Glimworm will continue to make a valuable contribution by co-creating the best UX (user experience) of the Amsterdam Metropolitan area for its citizens and visitors.